I read some really great books last month that I’d like to recommend to you.  All of these novels are considered Young Adult, but they appeal to more than just teens.  Being an English major, if you told me that someday I would read YA lit (and actually like it) I would have laughed heartily.  However, if you haven’t given one a chance yet, I would urge you to try one. 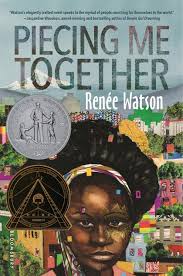 Summary–Jade is a poor, African-American attending a private high school through an academic scholarship.  She decides to be a part of a program tilted Woman to Woman, a mentoring program for high school girls.  Through the woman she is being mentored by, Jade learns more about her strengths, talents, and how to be true to herself when she doesn’t feel like she fits in.

Why I liked it–This book was beautifully written, and although it’s been two decades since I’ve been in high school, I really resonated with the main character.  Watson does a great job with characterization and seeing the multi-faceted world of a teenager and the questions of trying to fit in and figure out who you truly are.

Summary–Will’s older brother Shawn has just been shot and killed.  According to The Rules Will adhere’s to, he grabs Shawn’s gun and heads into the elevator to avenge his brother’s death.  As the elevator stops at each level on the way down, someone from his past enters.  Through the conversations, Will starts to piece together the bigger picture and what The Rules really mean.

Why I liked it–This was quite a dark novel with difficult subject matter.  (His other novel I read, Ghost, is much more light-hearted.)  What resonated with me the most is that many times, big decisions are made with haste.  This novel takes a moment to slow down and weigh all the pros and cons of a life-altering decision.  And the ending.  You’ll really like it.

Summary–In the 1300s, Nicholas Flamel, an alchemist, purchased an old book called The Codex.  After spending many years reading it, he figured out it contained the formula for eternal life.  Ever since, he and his wife have been hiding from those who want it.  When The Codex is stolen from an evil man 7 centuries later, Flamel must trust ordinary humans to get it back.

Why I liked it–This is a page turner!  The end of each chapter was a cliff-hanger, so naturally I had to keep reading to find out what happened next.  What was also enjoyable was how the author tied in all kinds of mythology into the narrative.  (Things from Greek mythology to King Arthur.)  Very clever.

Summary–In 1793, Yellow Fever racked the city of Philadelphia.  Maddie, the narrator and main character, along with her mother and grandmother, have to decide whether to keep their small coffeehouse open, or flee the city, like many of the other residents did.

Why I liked it–I love historical fiction and this novel did a wonderful job talking about the struggles of living not only in the 18th century, but the struggle to survive when a disease rampages a city.  The main character was realistic and it’s nice to see such a strong and resilient female narrator.

Have you read any of these novels?

Feel free to recommend books you think I, or my students, would like.  I am always on the hunt for a good read!

I am looking for…

I am looking for…